I'm just now getting the chance to reflect on my experience at my very first PyCon. It was held at the Salt Palace Convention Center in Salt Lake City, UT, spanning the dates of April 27 - May 3, 2022. My family and I drove up from Southern California, and after the conference, took a couple of extra weeks on the road. I'm finally home and (somewhat settled). So, time to reflect...

While at PyCon, I decided to sign up for a chance to present a "Lightning Talk", which is meant to be a 5-minute long talk on any topic of interest to other attendees. Saturday afternoon, I received a notification that my proposed talk had been accepted.

I huriedly tried to put some slides together for that evening's Lightning Talks segment. The title of my talk? My First PyCon: Reflections.

It was a quick expression of everything I had experienced so far. But now, without a 5-minute time limit, I can go NUTS!

Arriving at the Salt Palace Convention Center was exciting and intimidating. The venue itself had a very cool art installation at the East entrance. 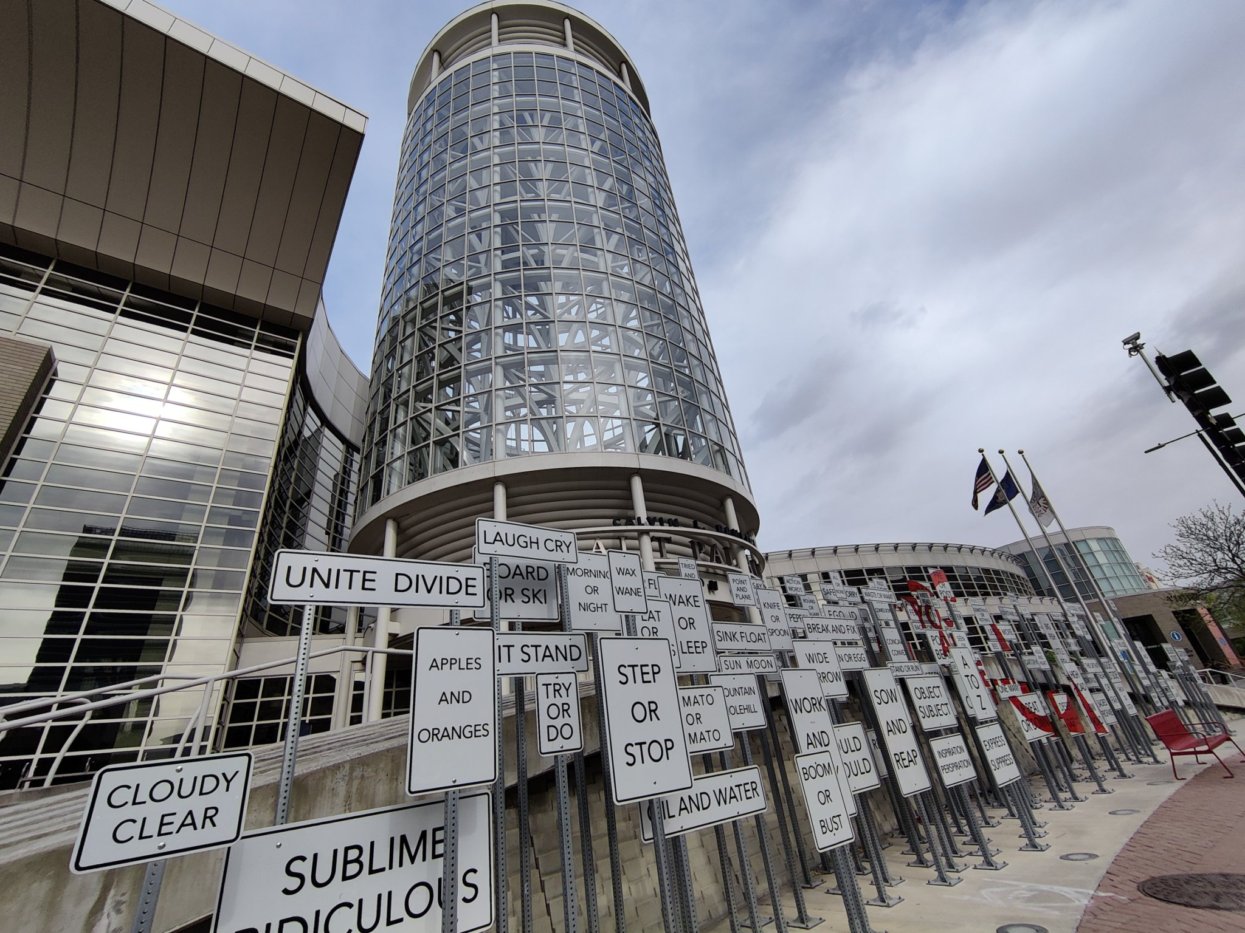 Since the first two days of PyCon are reserved for tutorials, there isn't as much foot traffic, which made checking in a fairly straightforward process.

In one of those "pinch me to make sure this is real" moments, I immediately went up to the Tutorial Schedule to make sure I was listed... 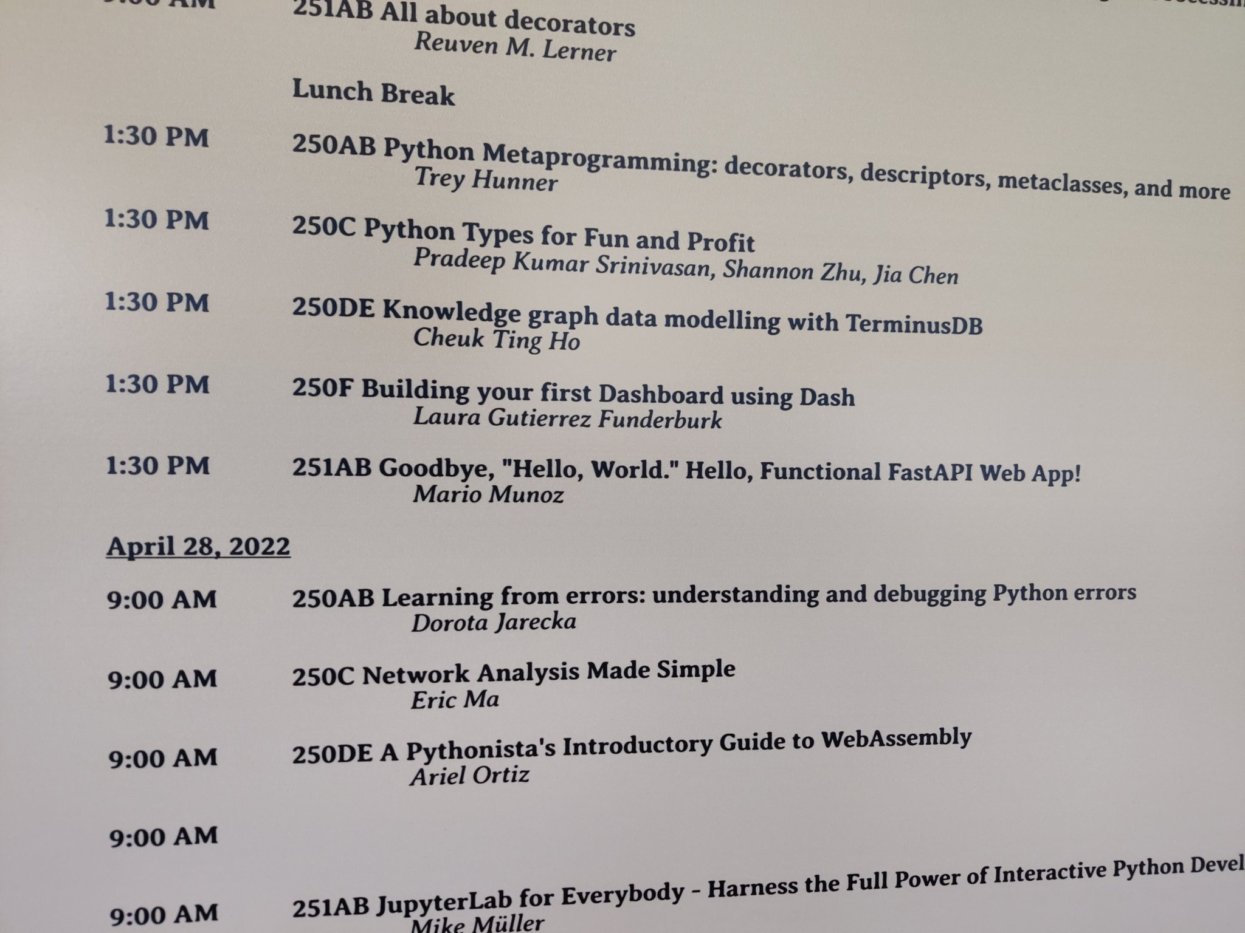 As a presenter, I had the option to go to the Green Room to review my notes and test my laptop connections. 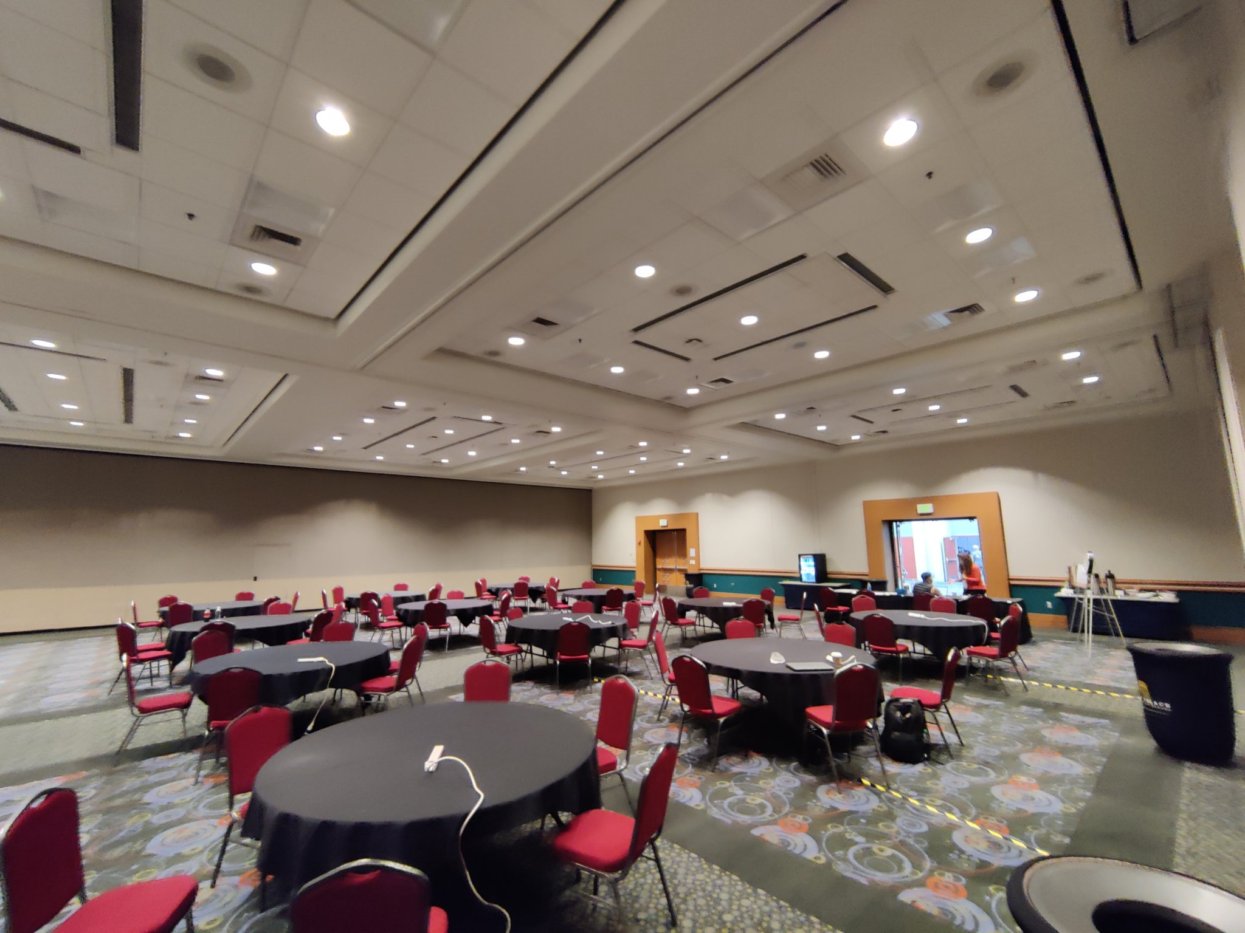 It was nice and quiet. There was quite more commotion once the conference talks began!

Since my presentation wasn't until the afternoon, I thought I might be able to go through my presentation from start to finish, but it proved hard to stay focused. Nervous energy, I suppose.

I checked some slides, fixed a few typos, and made sure my example code was running.

Oh, and I drank some coffee. 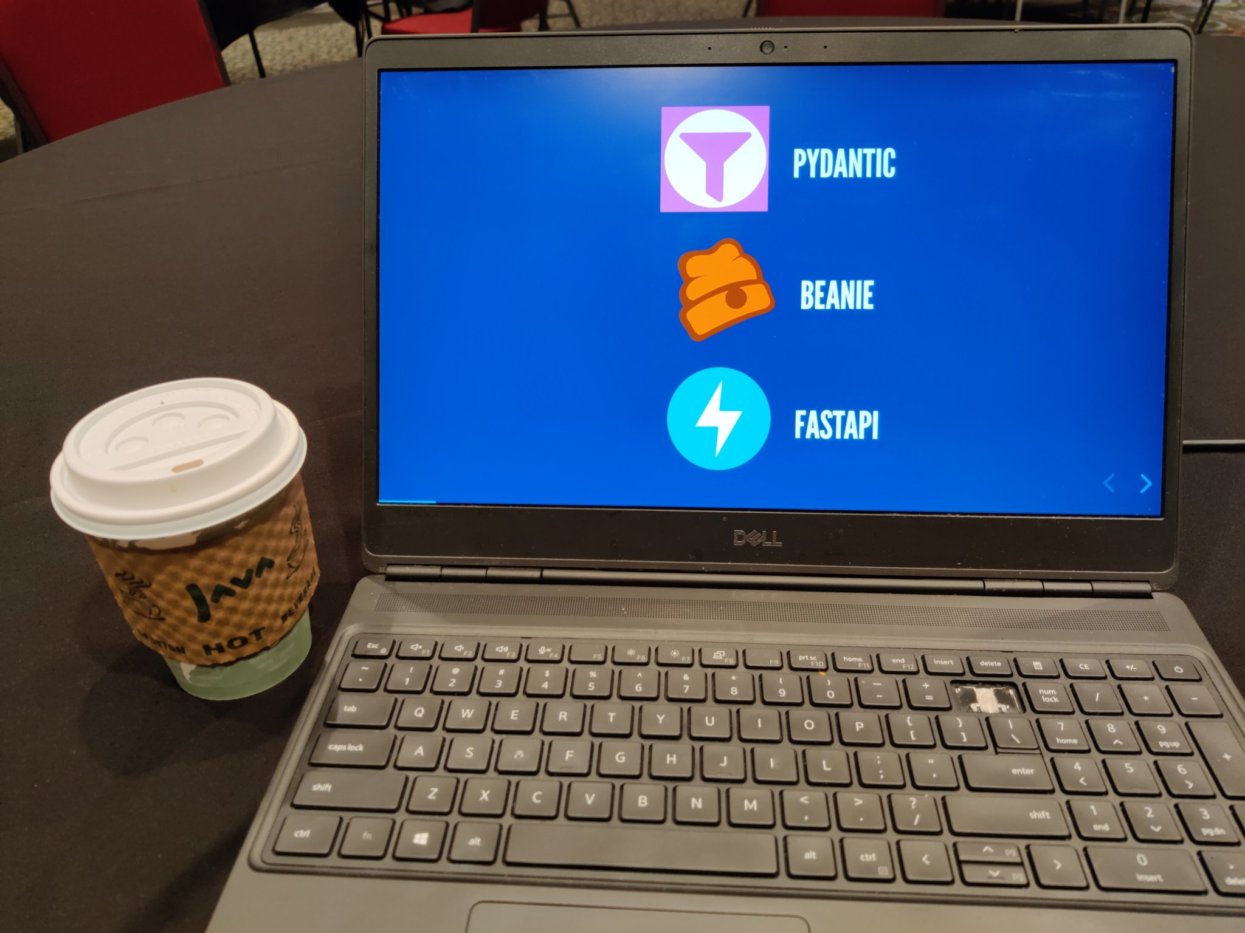 Once the moment of truth arrived, I was certainly nervous, but I felt focused and ready.

It took the first 5-10 minutes for the nerves to really settle, but that mostly fell within my welcome/intro. Once I got into the meat of the presentation, I honed in on my topic and just let the excitement carry me through.

Overall, I felt like I was able to accomplish what I set out to do. Since these are my impressions on PyCon as a whole, I won't say much more about my tutorial here.

As of this writing, the recordings have not yet been posted, though when that happens, I'll provide a link to the tutorial here.

What I can say is that my experience presenting was very positive. Most attendees were very engaged and some of them even laughed at my somewhat dry humor!

Of course, it's hard to know exactly how everyone felt with the tutorial once it was done, but it was encouraging to have a few individuals reach out to me personally at the end with questions/comments.

Overall, I knew I had a lot of ground to cover, and I also knew I would feel somewhat rushed at the end, but thankfully, my timings throughout the presentation were mostly spot on and expected.

I would likely change a few things if I present this topic again in the future, but I feel like I did my best, and considering this was my first time presenting, I feel fulfilled.

I'll leave the nitpicking for when the video is up.

Once my presentation was done, I was relieved and relaxed. Now I had the chance to experience the conference properly.

One thing that I noticed pretty quickly was how magnificent it was that this huge conference was being put on by only a handful of individuals. (Thanks Python Software Foundation!)

In the spirit of community, I thought to contribute by offering a little bit of help by volunteering for different tasks.

I didn't realize that by "helping", I would actually enrich my PyCon experience in unmeasurable ways.

I got the opportunity to help other presenters in the Green Room by being a Session Runner and Session Chair.

Funnily enough, I had to "pinch hit" the role of Session Chair early on because another volunteer had double-booked.

Did I know what I was doing? Barely. I had read the "job description" the day before, but wasn't sure if I would be comfortable doing that.

Well, not only am I happy that I was there to help, but I also got to listen in on some awesome talks that I otherwise might have missed.

And of course, the very first speaker I was chairing for had some technical difficulties, which meant her presentation started late.

But we worked through it and she did a fantastic job.

Another fun thing I got the chance to do was help set up the PSF booth. I happened by chance to see this tweet right as it was sent out:

#PyConUS2022 🚨Does anyone want a special bonus volunteer shift helping me set up the PSF booth?

So yes, I got to set up the booth with some awesome people I'd only met/seen on Twitter and it was definitely a highlight. 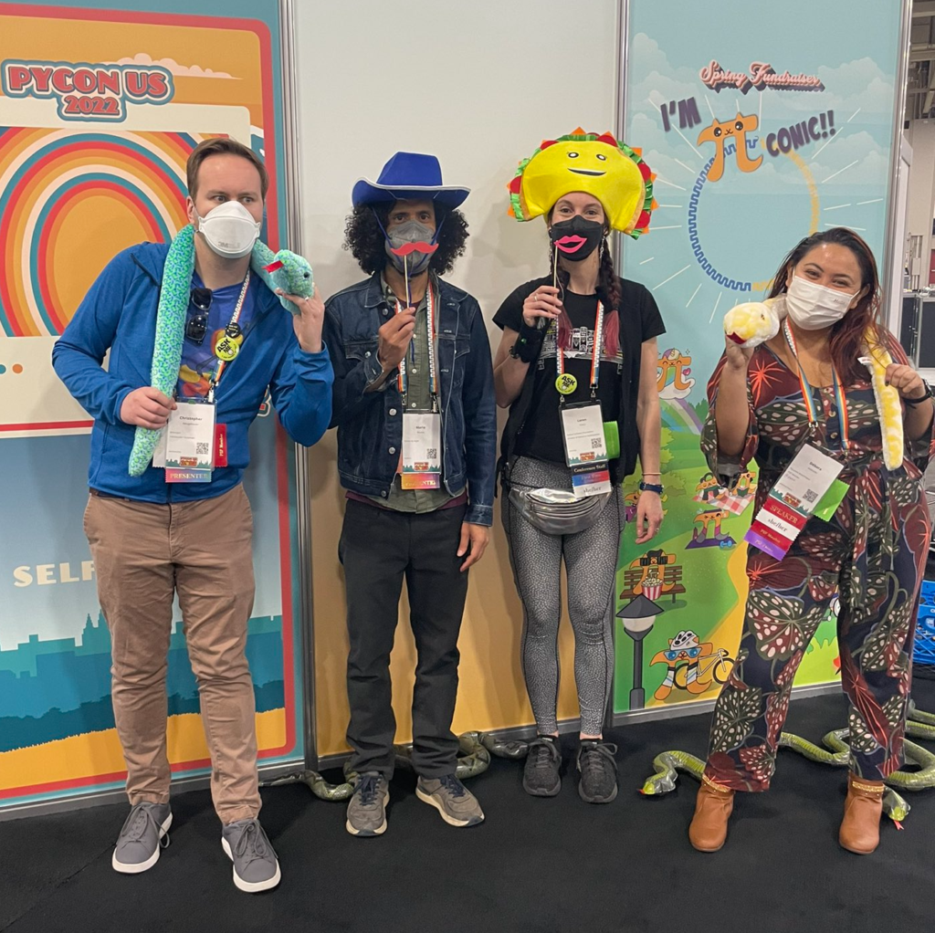 Attendees were able to enjoy the selfie-station throughout the conference, and it felt great to be a part of building it.

The following day, I also helped in the Green Room and got to meet some cool presenters throughout the day.

Anyone going to a future PyCon. Don't hesitate. Volunteer!

There are too many exciting things to try and summarize here, so I'll focus on the keynotes.

The opening talk by Lukasz Langa was an awesome and energetic kick off.

"My name is Lukasz and I come from the Internet," is how I remember his introduction. 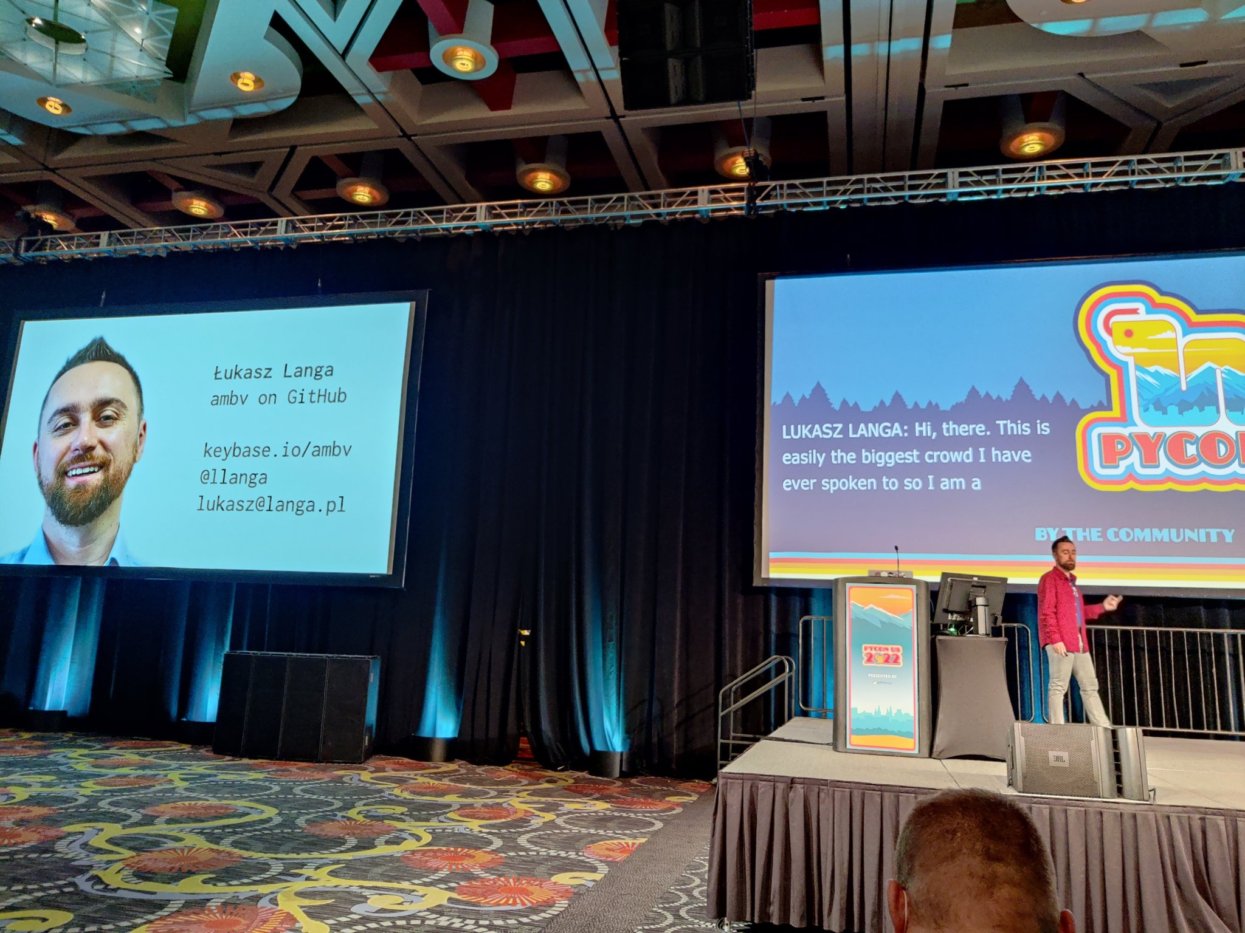 His focus on type annotations was commanding, but also clear and exciting, even for someone relatively new to the language (such as myself).

Once the different Talk Tracks began, it felt overwhelming choosing which ones to attend. As I mentioned above, volunteering allowed me to sit in on some exciting talks without having to choose. Win win!

But I wasn't too worried about missing the talks. That's because most of the talks were recorded and should be available online.

I learned about Python in the browser from this cool guy! 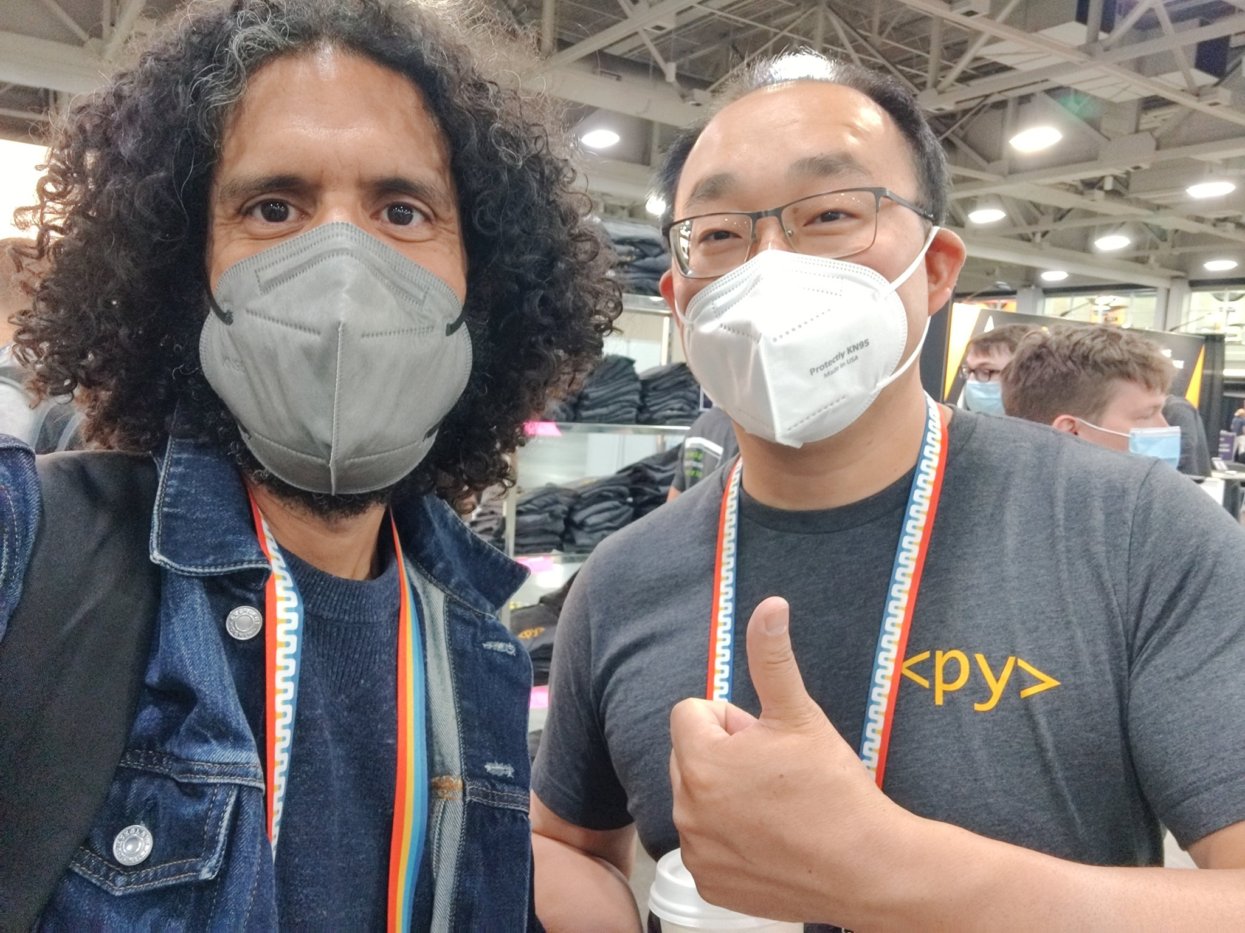 Seriously, Peter Wang's presentation of PyScript was certainly gasp-inducing. The energy in the conference hall during the keynote was very noticeable.

Lastly, Naomi Ceder's closing keynote talk was wise, inspiring, and introspective. As I feel myself entering the Python community at large (PyCon being a baptism by fire, if you will), I hope those values of a "gift community" remain at the forefront of what I do.

A significant portion of PyCon that's harder to quantify is the relevance of things that happen outside of the regularly scheduled and curated content.

Don't get me wrong. The curated content is all sorts of awesome! (I was part of it.)

But there is unmeasurable energy in meeting new people in the "Hallway Track" (a way of referring to interactions that happen outside of the aforementioned, scheduled events).

In addition, there are many somewhat impromptu events, such as the "Open Spaces" which are created by the community ad hoc.

For example, I was able to join an awesome game of Exploding Kittens (using an exclusive expansion pack, Exploding Pythons, provided by Six Feet Up) with Calvin and friends. 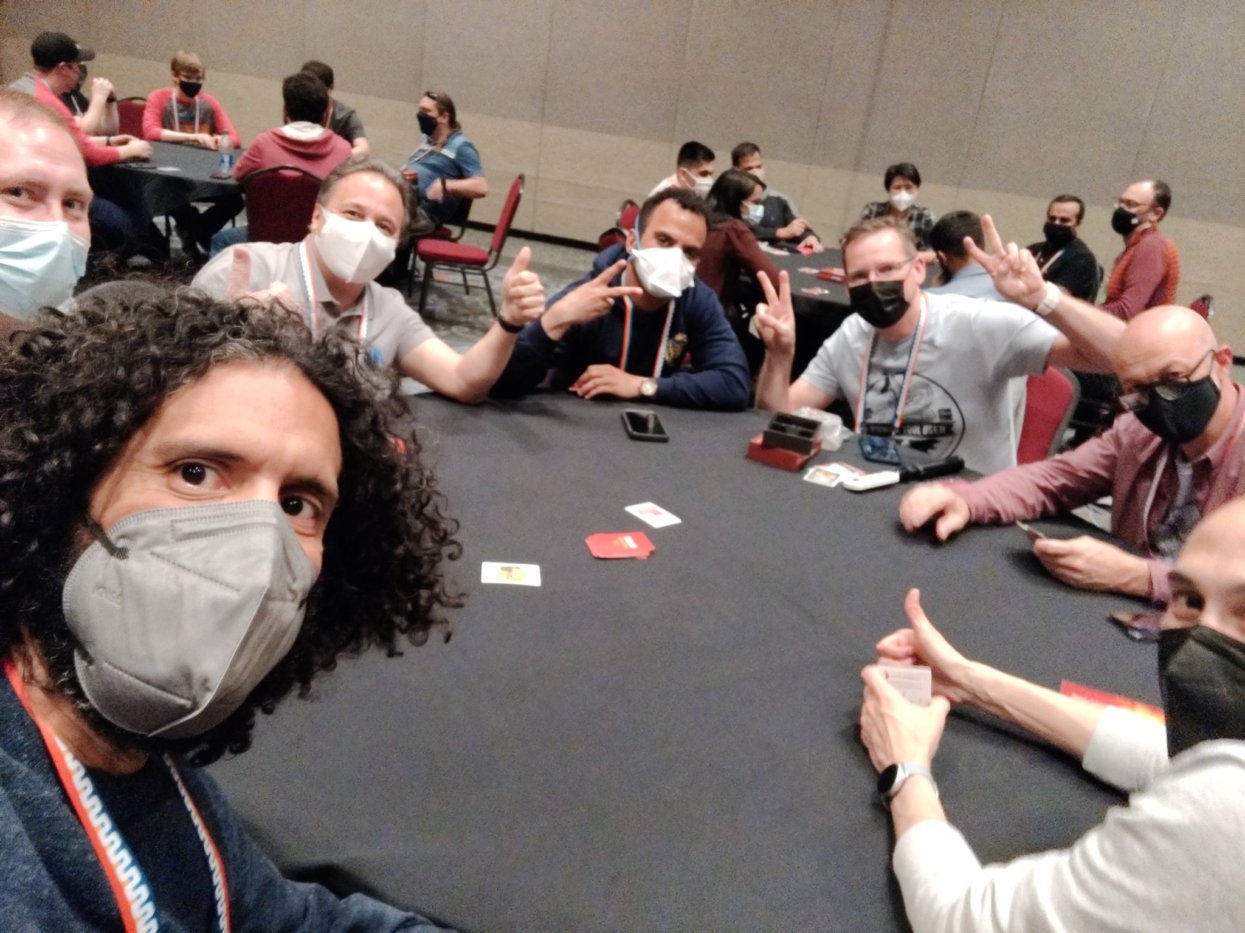 The Lightning Talks also provided plenty of surprise and entertainment that is hard to quantify.

So, at the end of the day, what is an introvert like myself to do? 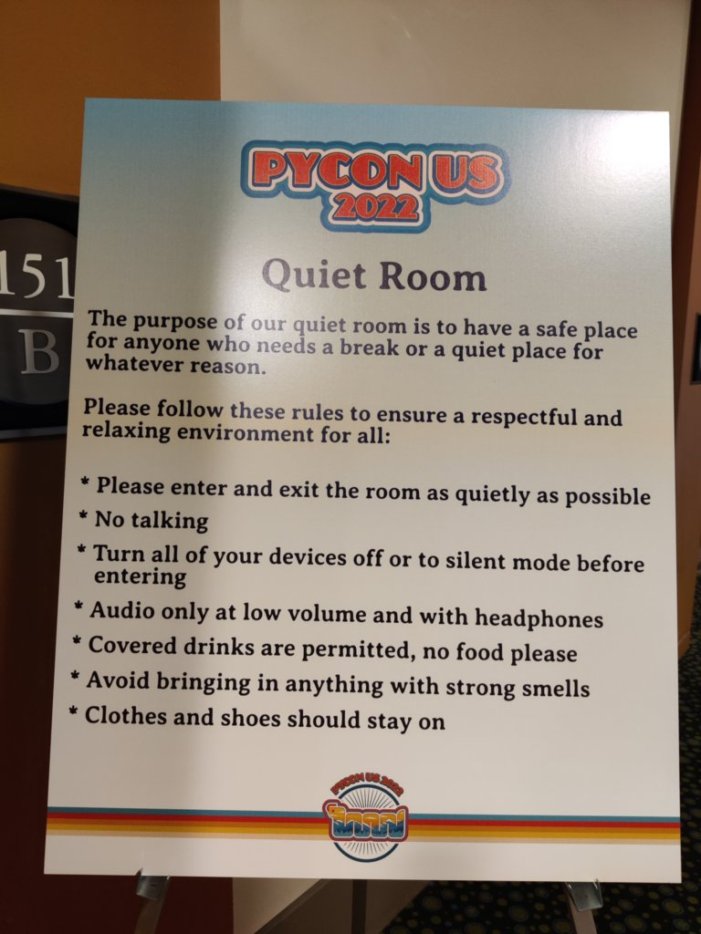 It's there, if you need it.

But by far, the best part of Python is...

I got a chance to meet folks who I only recognized from a small Twitter profile photo, an appearance on Python Bytes, or an old video I may have stumbled upon on Youtube.

I got to meet Anthony Shaw and Jay Miller. 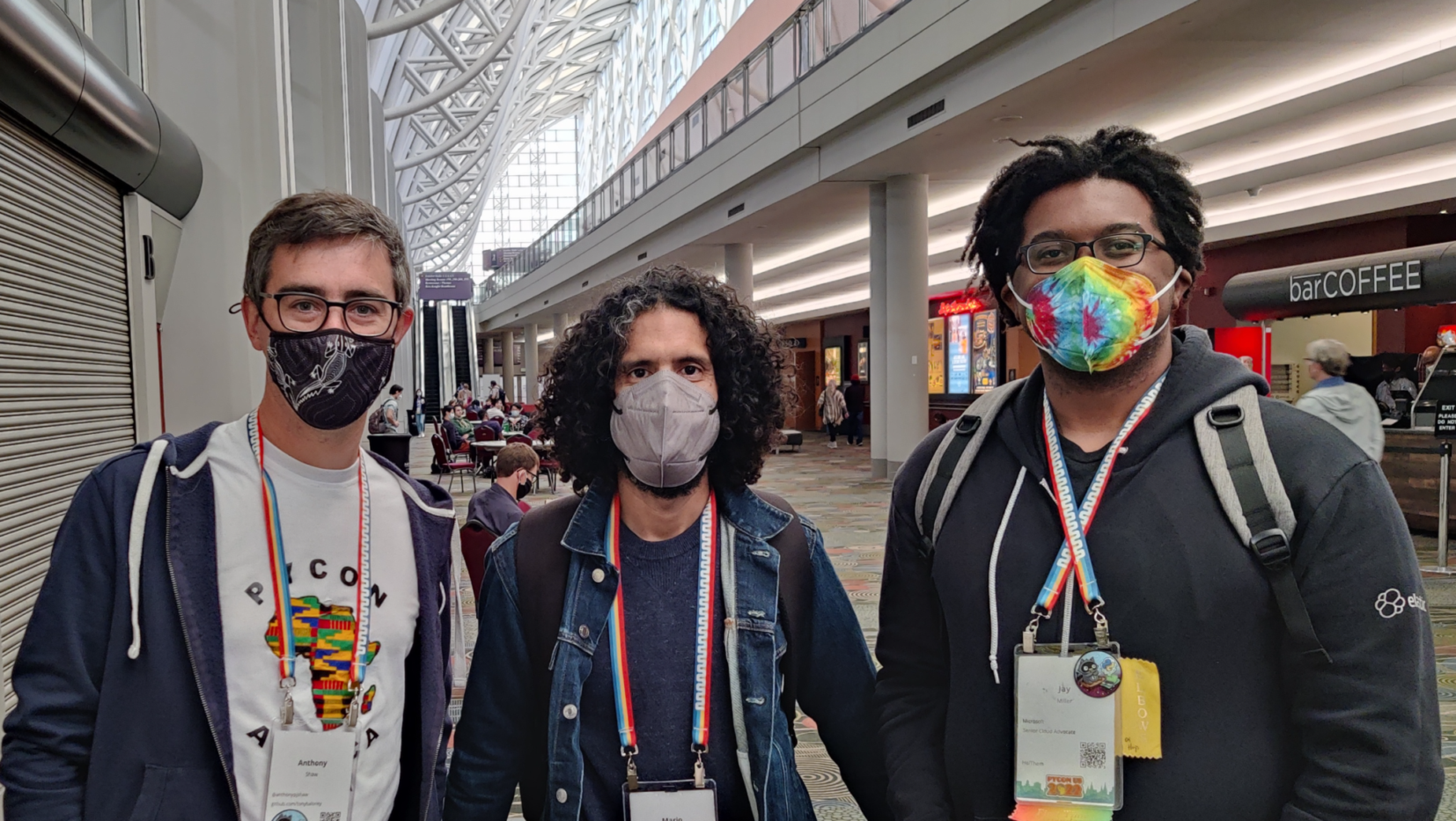 Lukasz from the Internet. 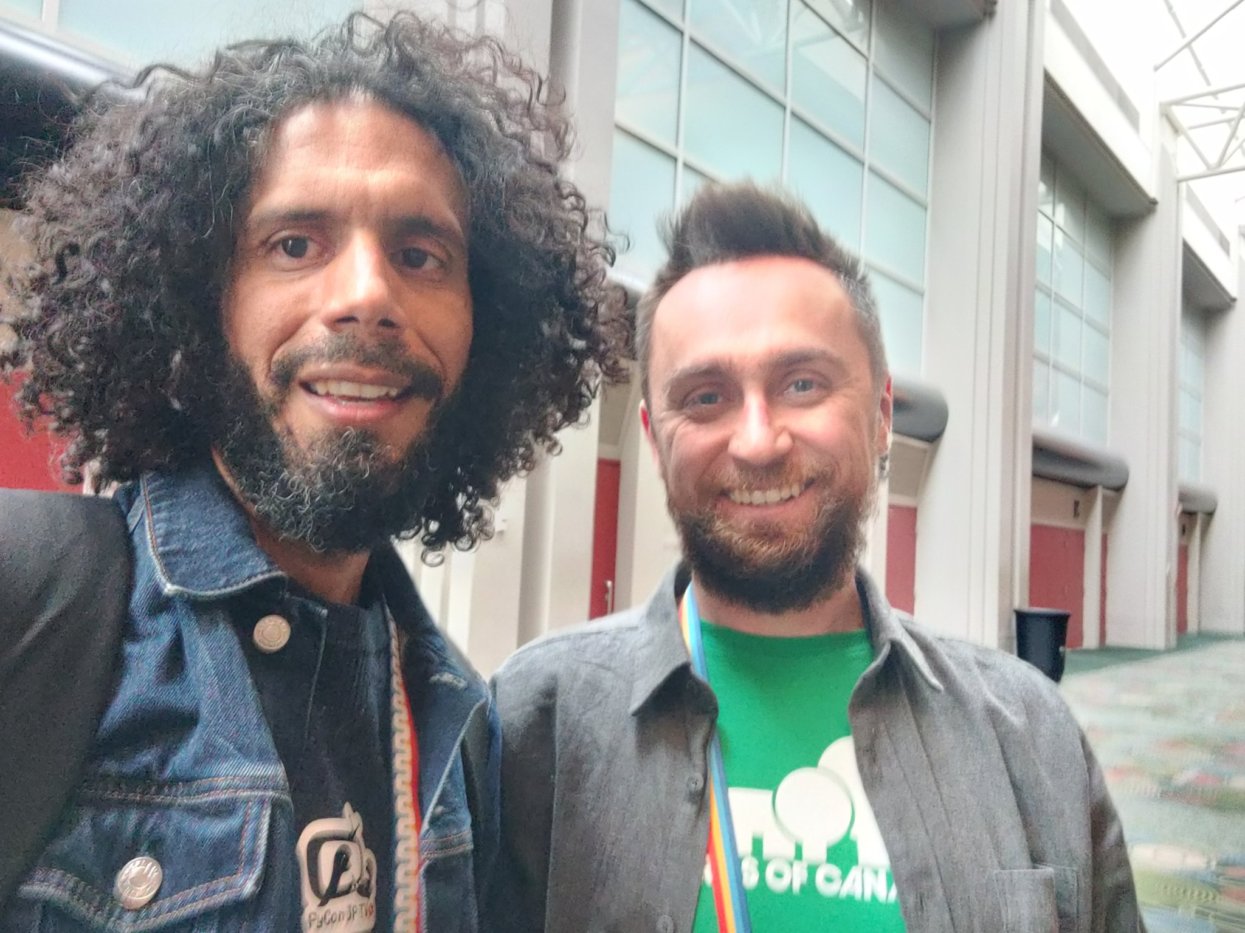 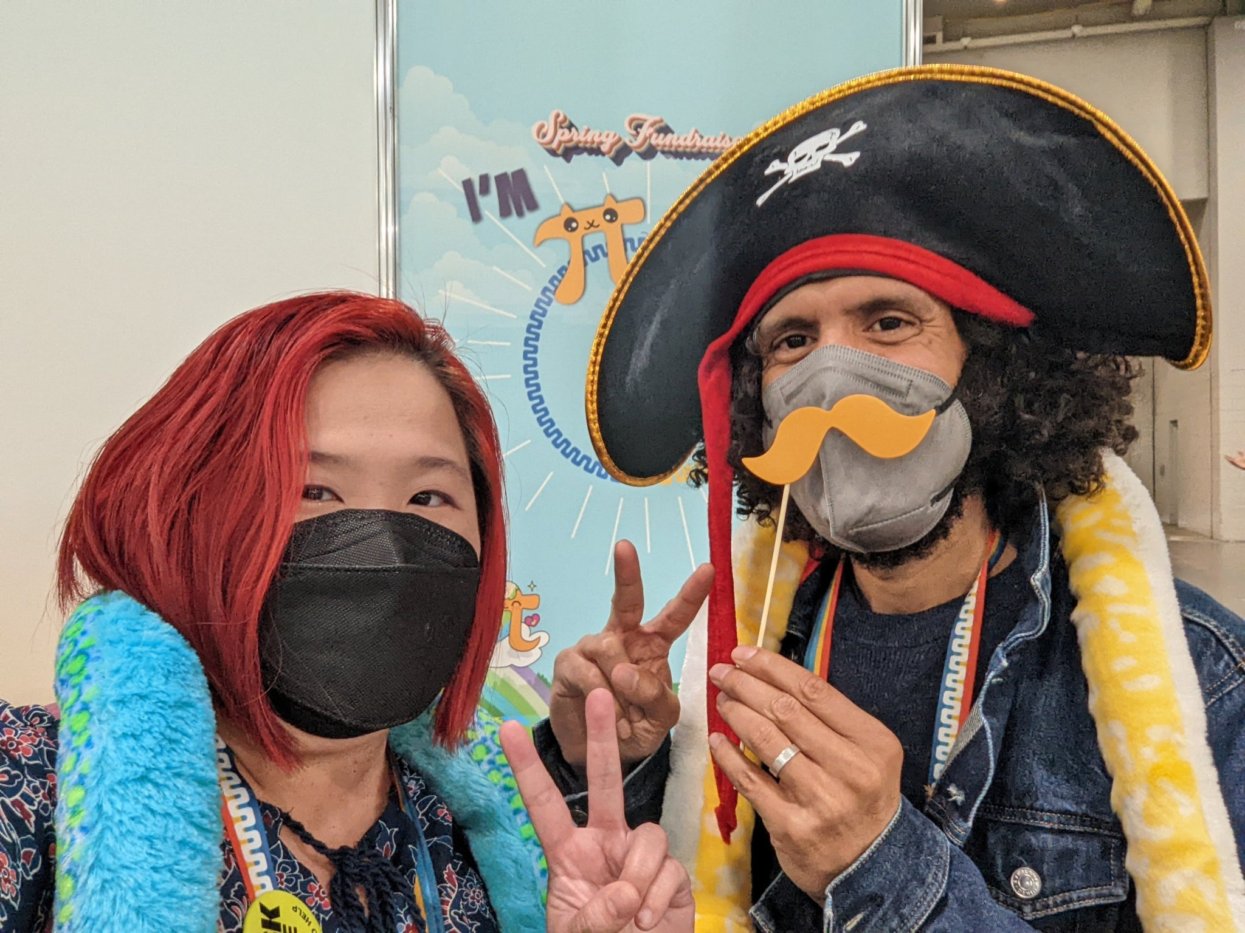 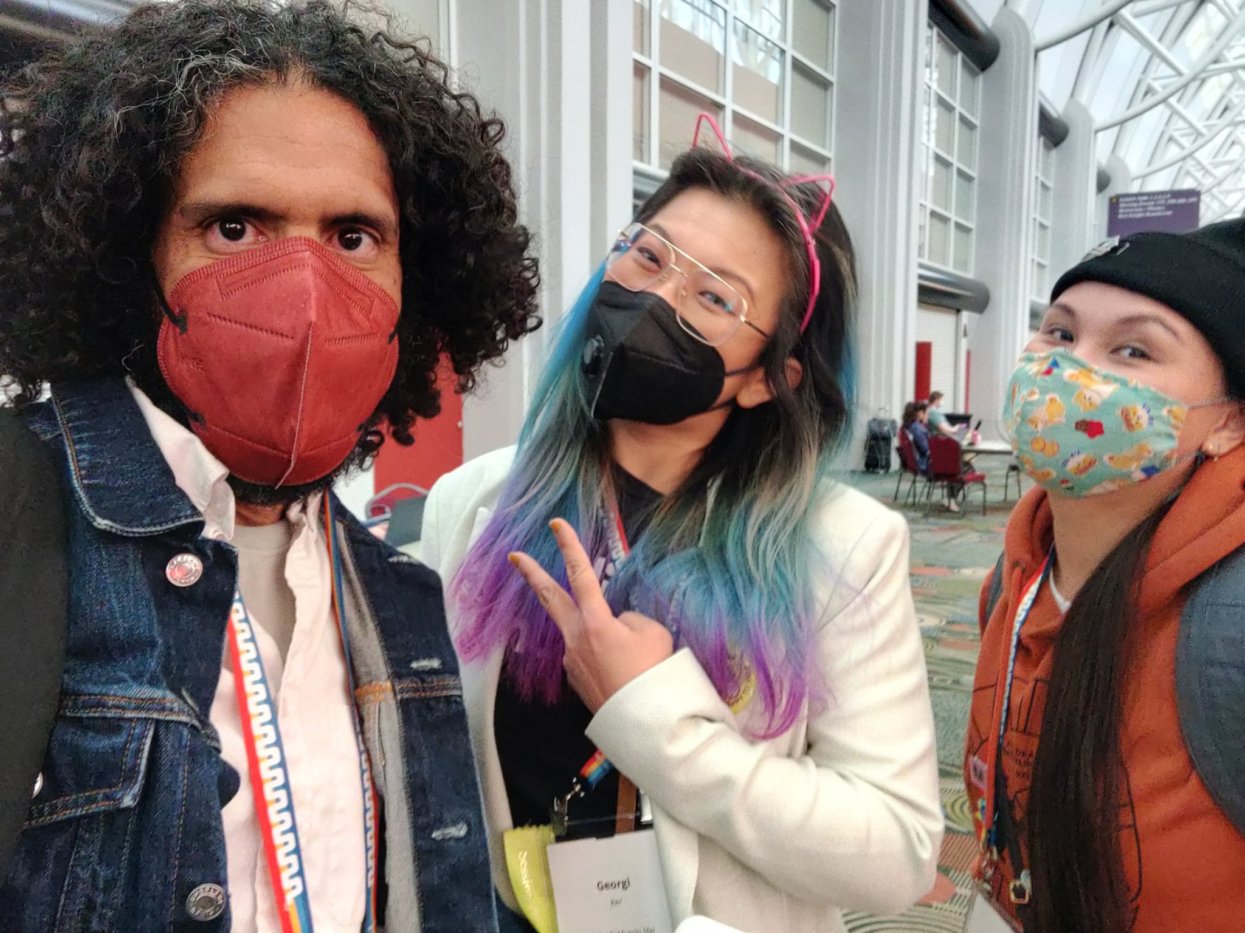 Pydantic creator Samuel Colvin. (Funny story here, when I was meeting/talking to Samuel, another attendee came up and was waiting on us to finish. I presumed it was to meet Samuel, but it was actually to comment on my tutorial! That was a surprise!) 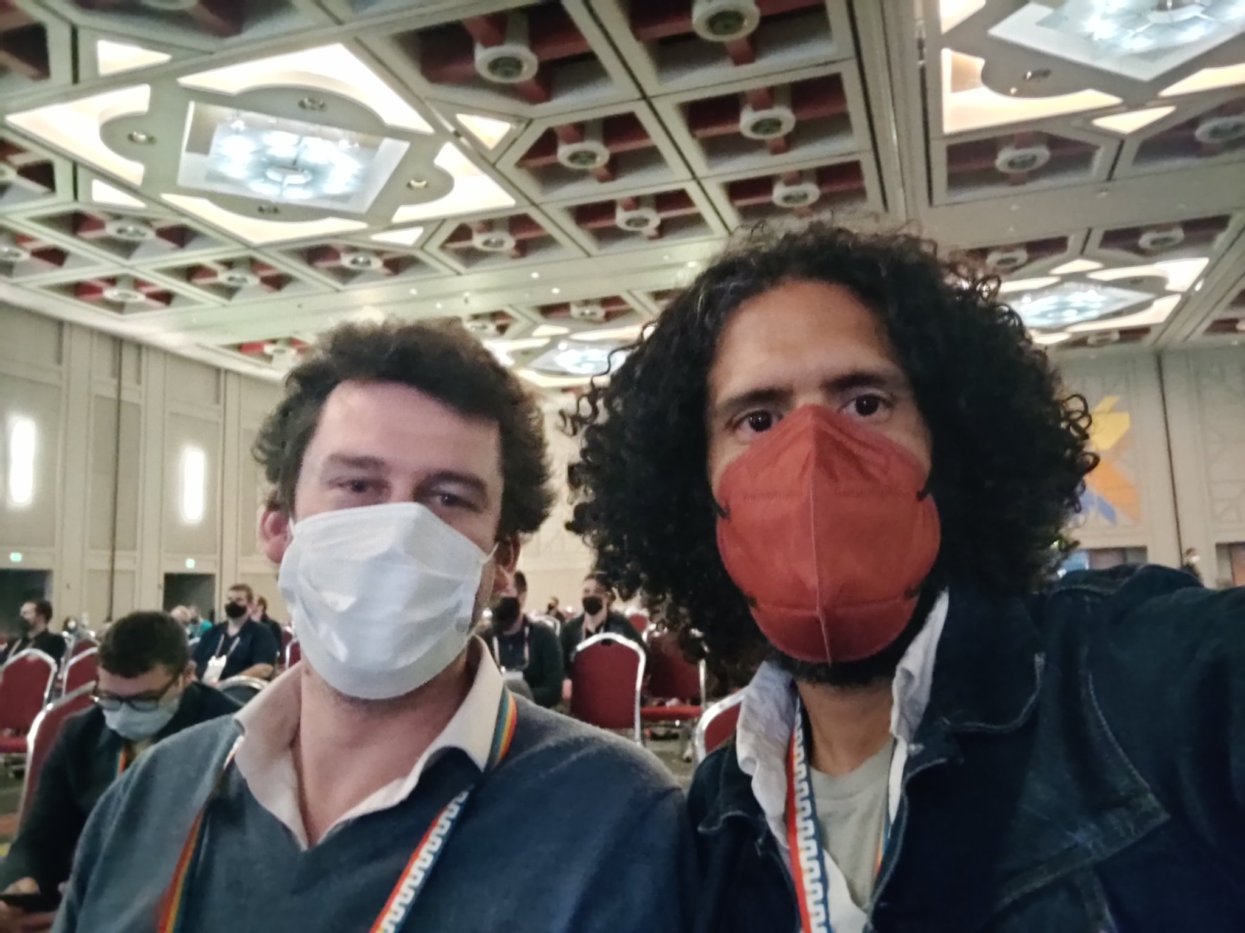 And lastly, the tireless Loren Crary, PSF Director of Resource Development (or All-Around Awesome Person, on the right) and the new PSF Executive Director (more like Director of Executing Awesomeness, on the left), Deb Nicholson. 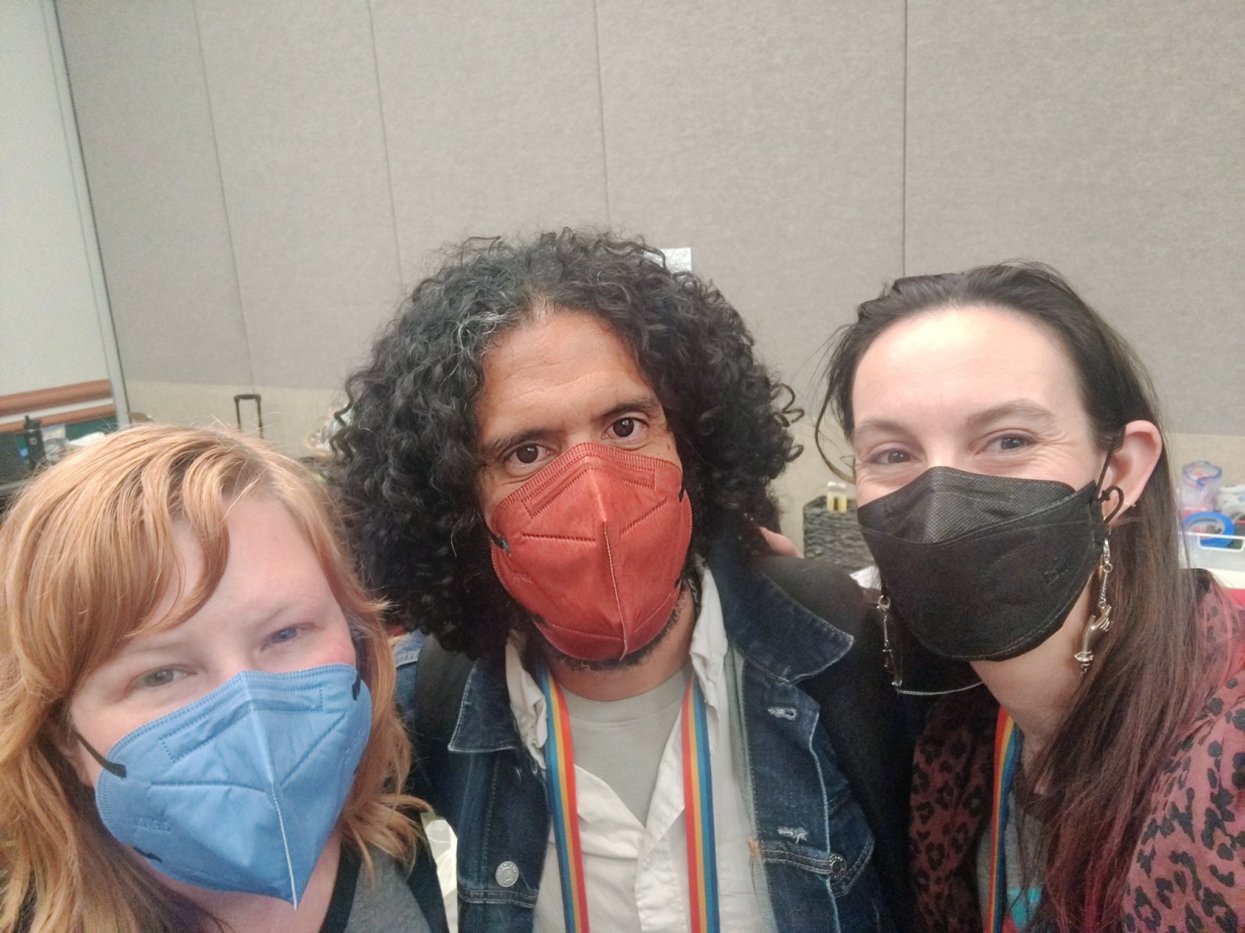 Phew! Obviously, there were many more that I met, but sadly, not according to my phone's selfie pics.

During my Lightning Talk at the conference, I loosely followed the structure of the Hero's Journey to illustrate my experience at PyCon.

But in the end, I realized I'm not the hero of the story.

PyCon is People. Each one a hero in their own right. But no one fully complete without each other.

I am forever grateful to the PSF for putting on such a wonderful event and inviting me to be part of it.